Thai films from various genres like short film, classic drama, animation, documentary, comedy drama, horror, and action will be screened during this years ‘Thai film festival’, starting today the 29th of March and running till Saturday the 31st of March in India’s star-studded city of Mumbai.

Note: Admission to all screenings is free of charge, so all the more reason for you to not miss this Festival!

The Thai films will be screened in Thai language, but will be accompanied by English subtitles. There will also be panel discussions on ‘Film Production and Animation in Thailand’ that will feature Thai directors and producers, in order to facilitate academic exchange.

The President of Foreign Film Production Services Association of Thailand and representatives of National Federation of Thai Film Associations will meet Indian producers and directors to help promote Thailand as a filming destination. 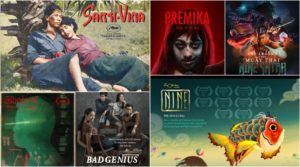 Its Opening Ceremony that is scheduled for today, the 29th of March, 2018 will showcase Thai cultural performances and food.

The Festival will also allow the Indian public to gain a firsthand experience of Thai Culture through cultural performances, food and of course films. The festival also aims to improve the cooperation between Thailand and India in academic and cultural exchange through film diplomacy.

So what are you waiting for? Check out the Thai Film Festival 2018 today!